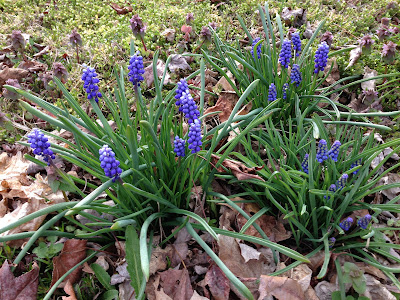 Bear calls them bluebells; I call them grape hyacinths. Whatever, they're practically the only game in town this Easter.
Posted by Claudia at 11:35 AM 2 comments: 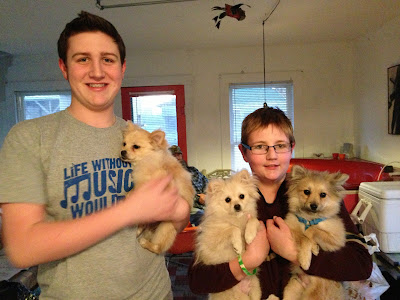 You've met Bear. Now meet Trevor and Treyton, kind of the other end of the spectrum, who have lived in the rent house next door since, Treyton informs me, he was in third grade (he's in sixth now). Oh, and these are the New nextdoor neighbors, poms Dancer and Blitzen and—Poof. Or is it Poof and Dancer and Blitzen? Well, I'm pretty sure about Dancer anyway.
Posted by Claudia at 11:24 AM 2 comments: 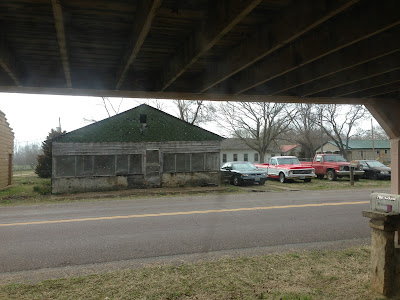 The car on the left is Bear's latest ride, and the one he uses. He bought the two-tone Chevy for the  body but seems unsure of the engine. He has hit three deer in the red pickup, and it's pretty much done for. See comedian Jeff Foxworthy's point #4 below. The Nissan I drove out here has been dubbed a deathtrap if it hits a deer and also the battery is dead (see #9 below and note that I just had to jump my truck after leaving the headlights on). 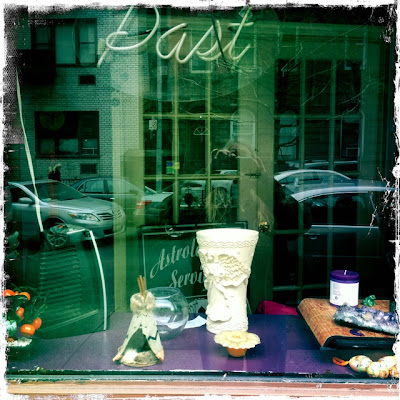 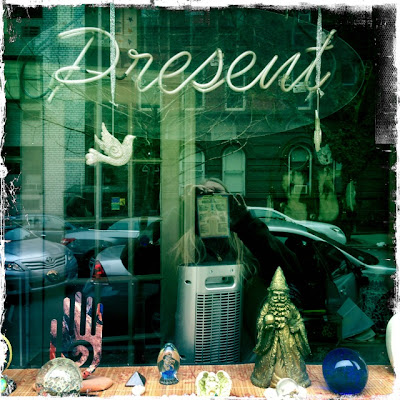 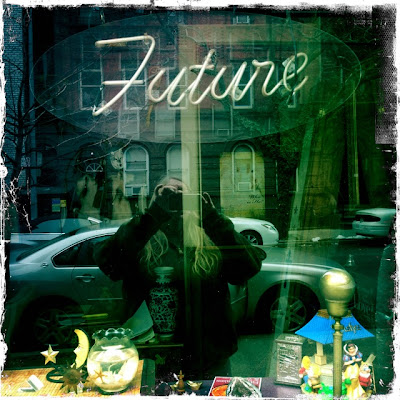 So do biographies by definition have depressing endings?
How about autobiographies?
I only wonder on account of dreading the last chapters of Short Nights of the Shadow Catcher.
Posted by Claudia at 10:59 AM 2 comments:

The first round of this year's What's in the Truck? contest has been decided. Was there ever any doubt? Dada wins. Though he did mess up on the bananas. His prize: leather scraps to wrap his knife collection and a gluten-free catfish dinner at the River's Edge cafe.
Last year's winner, Bo, is this year's runner up. He never got his prize from last year (was it the Chicago Manual of Style? I forget.). This year he wins a railroad spike that hitchhiked all around this great land of ours in the years 1968-1973.
For D.R. : Three hand-selected Block Island stones and camo pj's
Dianne has already received her prize: The charming item above that mounts on your favorite tree to give it more personality, regifted from the Biologist.
Like any of us need any more shit to haul around!
Thanks for playing!