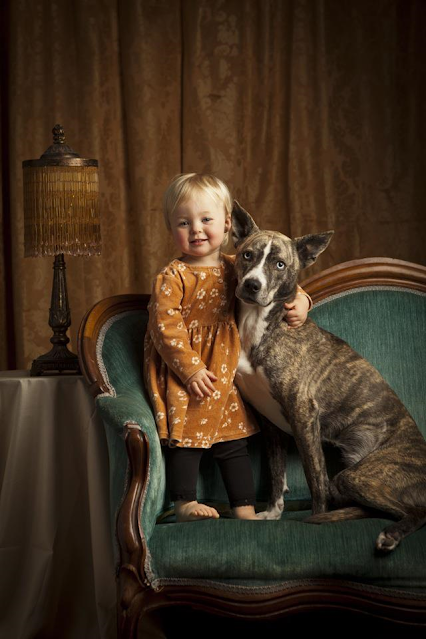 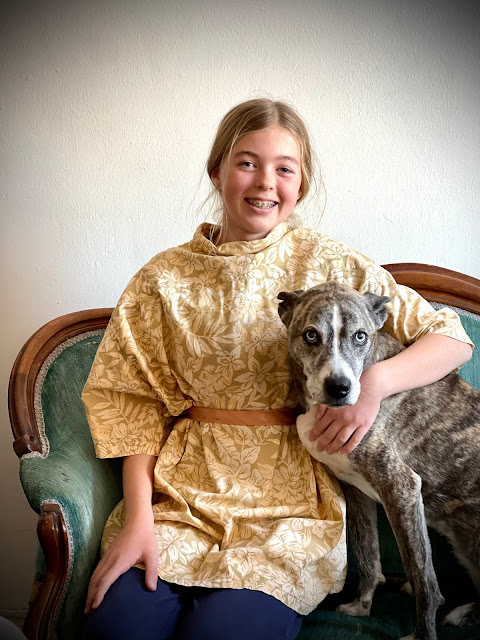 Posted by Claudia at 4:16 PM No comments: 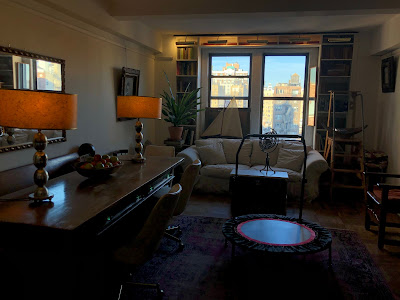 I'm not an impulse buyer, and knowing what I do about "trend" articles  in the NYT (i.e. always over by the time they are printed), I can't believe I bit on this thing.
I wrote Hannah, "I think I have lost my mind. I just bought a thing based on AN ARTICLE IN THE NYT."
A mini trampoline that I have nowhere really to put. And what about the downstairs neighbors? But it was so convincing! Good for balance, cardio.  Besides, I told Hannah, "It costs less than a case of beer! And if I don't want it the kids will like it."
She laughed her ass off. Oh well, at least I amused someone.
Posted by Claudia at 2:55 PM No comments: 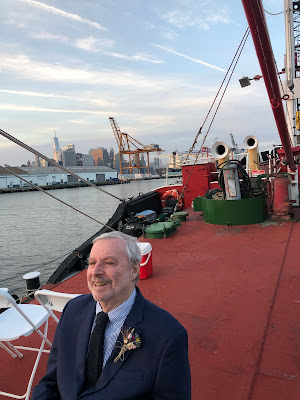 This was a happy man. His son Stephen had gotten married earlier this year, and now his daughter Zurianna was getting married to her partner of a decade. The nuptials took place on board the Mary A. Whalen, an old oil tanker turned museum, captained by Ed's friend and Red Hook neighbor Carolina. She also presided as the couple, quite literally, tied the knot in a Celtic ceremony at sunset, assisted by their respective mothers. 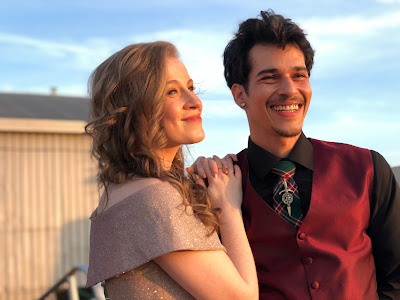 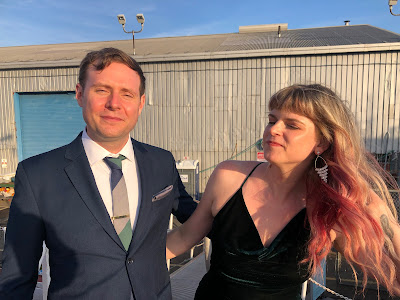 Stephen and his bride. 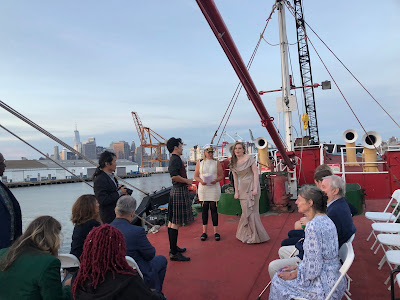 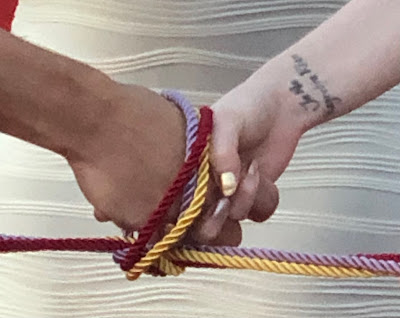 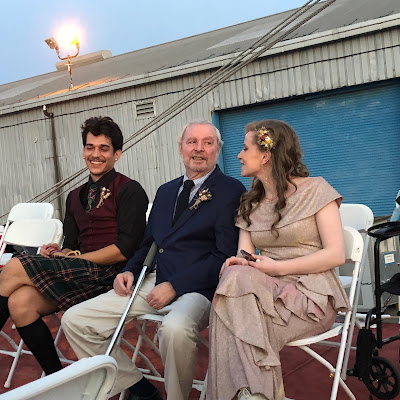 It was the party Ed had dreamt of: On the boat, with his neighborhood friend Neal, chef of Petite Crevette, cooking below in the galley and other neighborhood friends in attendance. Not to mention designated photographer Chien-Chi Chang, who made it all the way from his home in Austria. And, yes, I have been dilatory. This was in September. "It was heaven," Ed said.
And then the old folks left and the young folks danced. 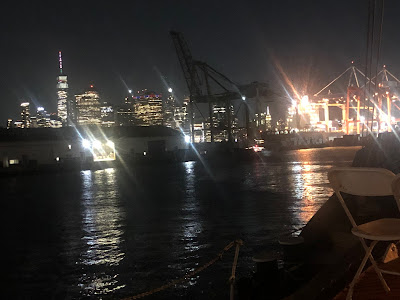 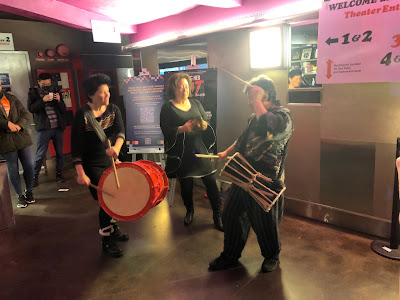 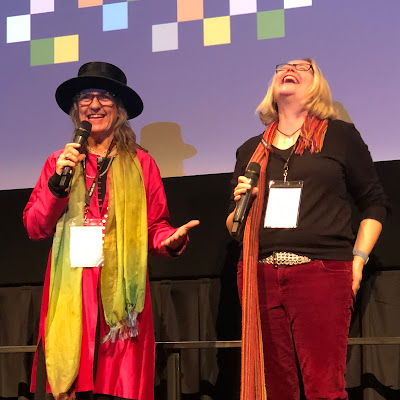 This could be called, Lo Ladies, the Film. Keri Pickett, one of the Lo Ladies of 30 years fame this year, co directed a film about Taiko drumming. That's Keri on the left, above. with her fellow director Dawn Mikkelson at the NY.doc film festival last night. Three of the stars of the show (top photo) did a preshow drumming  in the lobby of the IFC Center in the Village. Info at THIS SITE.
The documentary is the story of how female Taiko drummers came from Japan, where drummers are traditionally exclusively male, to join with US women and nonbinary people in Minneapolis to put on a show. It is a classic tick-tock performance story: they bond, they freak out, they disagree, they worry about covid, and they all come together in the end for the show of shows. This film works because of the sheer excitement of the drumming. And the colorful costumes and characters. And the emotional arc which left me pretty well crying though whole ending. I was gratified that Keri included me in the credits as someone who critiqued the rough cut.
The film has been shown to acclaim at more than a half dozen film festivals, including in Austin and Mill Valley. But New York is New York. Huzzah! 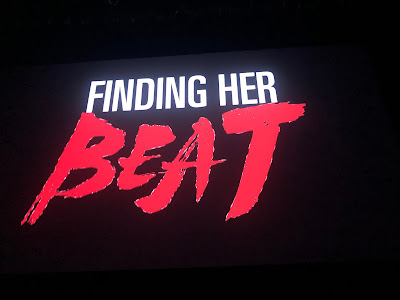 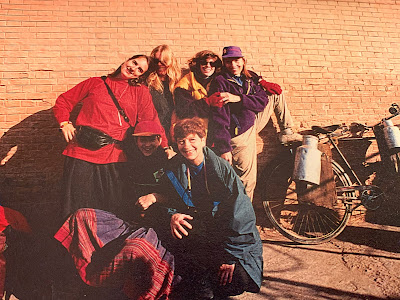 That's Miriam, front and center. She would turn 62 the next day. There were seven of us (with photographers in the crowd, usually one was missing from the picture.) We didn't know one another very well. Most of us had just met in Kathmandhu. On this day we were flying to Pokara, before doing a fairly arduous hike up the Kali Gandaki Valley to the Kingdom of Lo.
We were staying on the lake, but headed for the main drag and restaurant row for dinner. We would stop at a place and say, "This looks good." But Miriam said, "No, no, I don't like this place." This happened like four times, and then rest of us were starting to wonder how we would be able to tolerate her for the next few weeks if she was going to be s difficult.
"This looks good," said Miriam finally.
It looked the same as all the other places she had just rejected.
We went in, ordered and ate dinner, and then the waiter arrived bearing a cake with candles.
It was Miriam's birthday, and she had gone in advance and ordered a cake there, on her daughter's orders. Hence the certain restaurant.
Oh, we laughed.
And it was not the last of Miriam's birthdays we were to celebrate. In fact, we celebrated one today!
We did her 80th. And Doro and I did these subsequently. 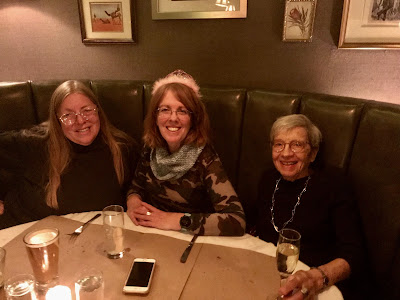 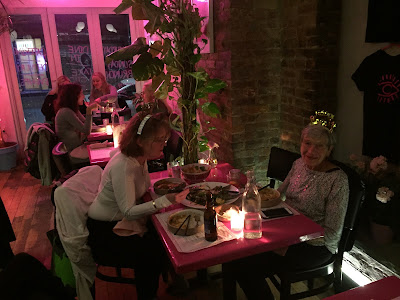 And today it was Doro and Keri and I at Miriam's apartment on the Upper West Side. That, as someone pointed out, was a Lo Ladies quorum. Miriam is turning 92 this year, 30 years after we met. 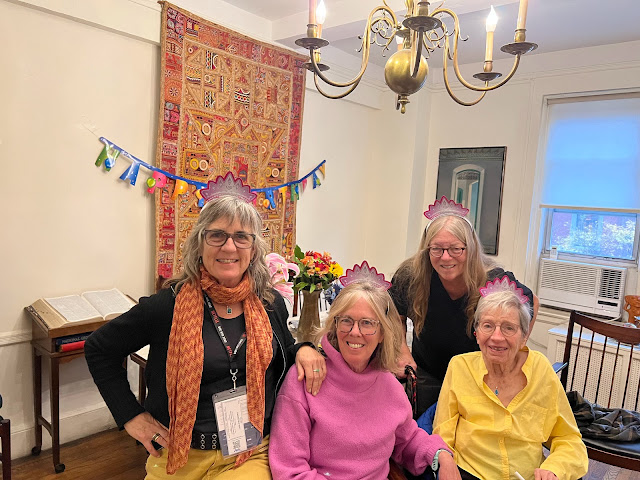 Posted by Claudia at 8:10 PM No comments:

This is my friend Carly. We became friends on line with our respective blogs, when she lived in California. Then, sight unseen, she stayed in my apartment when I wasn't there for—a month maybe? Everyone said I was crazy to house a stranger, but I felt confident it would be fine, and it was. I think we first met IRL maybe 15 years ago. She was originally from Missouri, and when I bought the Goose in 2009, she came down from Kansas City with some frequency. Now that she lives in Arkansas, in the town where I grew up, we get together probably once year. She and her young son spent a month at the Goose at the outset of the pandemic in 2020.
I have watched her move from finance, to art to psychology. This Saturday she is giving an on-line presentation at the Jung Institute. YOU CAN REGISTER HERE. I don't understand psychology-speak that well, but I certainly understand the topic she addresses firsthand. As does she. In the Ozarks, she and I are blues in a red sea. I hope she has some answers to the pressing question: How does one communicate with people whose world view is utterly different?  The NYT did address this pre-Thanksgiving dilemma in THIS ARTICLE.
Carly writes of her research project: "The intent was a radical act of hope: If the investigator looked deeply into social division, could creative potential be found within the destruction? The results of this research answer that question through the lived experiences of people across the United States who sought to engage, human to human, with their sociopolitical other. The themes that emerged illuminate movements in awareness that occurred during conflict: self and other, personal and collective, past and future. Together, the themes tell a story of what happens when a choice is made to wrestle with social angst and division."
I'm hoping to find hope in this radical act of hope. Please join us. This must be resolved. 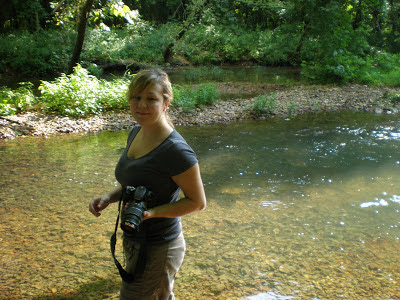 Carly's first visit to the Goose in 2009, where she fell in love with the Eleven Point River. 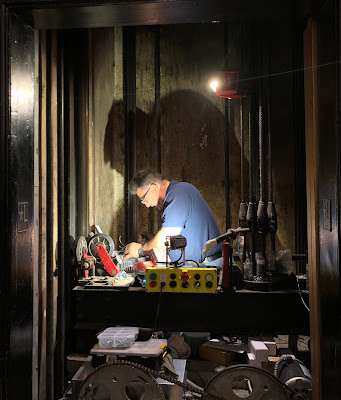 Very exciting. It looks like they are close to fixing the passenger elevator on my side of the building. It got waterlogged during the fire, and we have been using the freight elevator, which must be operator operated 24 hours a day. (One neighbor cracked, "First floor. Perfumery, stationary, and leather goods." She was hearkening back to the elevator operators at Sak's Fifth Avenue. Also here. It wasn't that long ago that we got unmanned elevators.) I didn't like the wait for the slow elevator this past week, but it was hella better than walking up 15 floors with groceries.
Thank goodness I don't live in one of these babies on Central Park South. They have had elevator trouble too, and 15 floors of stairs (well, minus the thirteenth) is a piece of cake compared with 98 above ground floors. 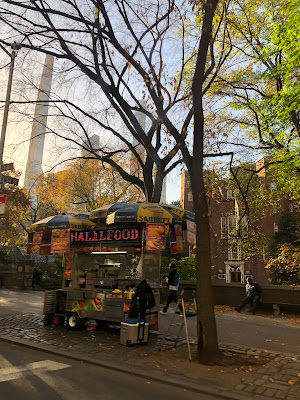 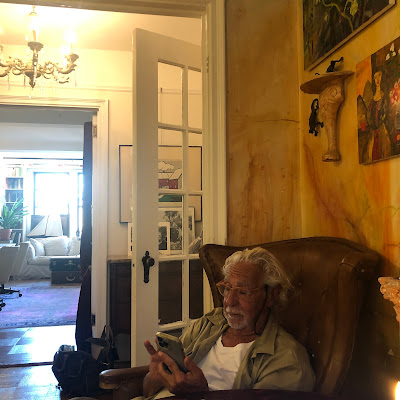 Douglas and Lynn came to town for the night en route from Block Island to Simon's parents' day in Philadelphia. (To clarify, this meant that Douglas and two of his exes were sharing quarters.) They left in their wake many gifts including, naturally, dahlias, and half the contents of Zabar's, including salmon roe, which I just ate for breakfast.  The parents were long gone by this ayem, in Philadelphia buying supplies for their son, who, along with his roommate, is stricken with flu. 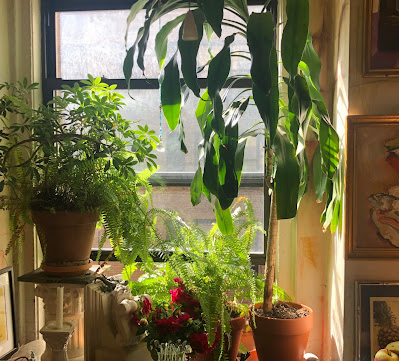 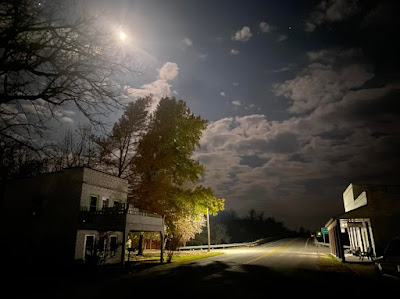 The Goose, spooky by moonlight. Apparently Thomasville is having a moment in area news. Front page of the Quill for the acquisition of  a Thomasville Confederate soldier's diary. A Woodside. I met one of his descendants, who still has a cabin in town. I look forward to reading it once it's digitized.
More info about the diary HERE.
Posted by Claudia at 2:47 PM No comments: 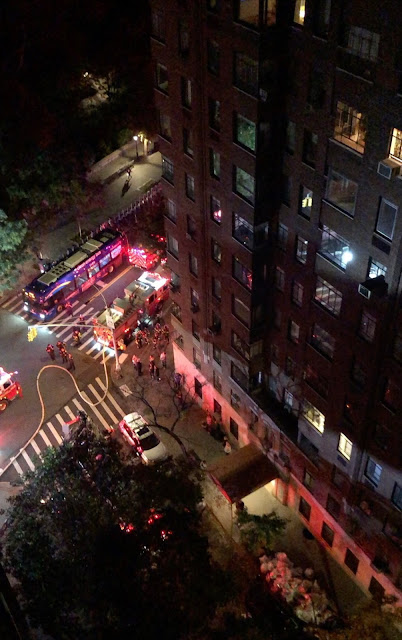 I smelled smoke last night about midnight. I opened the front door, and the hall was filled with smoke. I went back inside and packed up my computer, my wallet, my passport and coat, and prepared to walk down the 15 flights to the lobby. A fireman was headed up the stairs. "Go back in your apartment, and don't breathe in the smoke," he said. "The fire is downstairs." I went back in and looked out the window  and talked on the phone with a neighbor who had had to evacuate. They broke down her door. The fire was on the floor beneath her.
"Did you pack your hairbrush?" my sister asked this morning. We laughed.
Many years ago, I was staying in a hotel in Ulan Bator, Mongolia, when I smelled smoke. I grabbed my hairbrush and rushed incontinent down the smoky stairway. "Dowling, get back here!" the photographer with me hollered. I went back up to the room. She was methodically packing cameras, passport, money, soaking towels in the sink and knocking on all doors in the hallway to alert people.
But, hell, I had my hairbrush!
We went downstairs using the unsmoky stairwell. It proved to be a trash fire in the garbage chute of the hotel. The firemen were slow to respond because they were watching the weekly episode of a telenovela, the only show, apparently, subtitled in Mongolian. The whole city just stopped while it was on.
Last night I had my money, my passport and my computer. Apparently I've learned something in the past couple decades. I did neglect to pack my meds and my power cords. And my hairbrush. 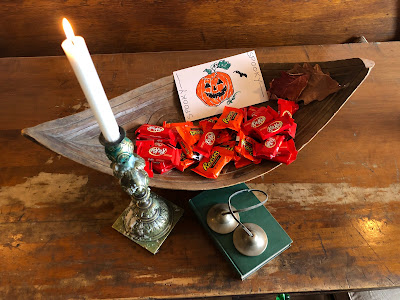 On Halloween 60 years ago, my father left my mother.
He left for his boss's secretary, though we didn't know that at the time. Of course when we found out she became the evil witch.
My mother was prostrated. So I hastily helped devise Halloween costumes for my siblings and took them trick or treating.  Chris was a tree, wrapped in brown paper bags and carrying a branch in each hand. Ben was a sheet ghost, with eyeholes that kept slipping out of place, in the age old fashion of such costumes. Erin, at that time only five, was a gypsy. It was dark as we plied the back streets near our Briarcliff house, dark as my fears. Things I had no control over were changing.
I thought I had exorcised these ghosts, but memories come back around.
And here they are again. Another year. The haunting.
Posted by Claudia at 12:14 PM 3 comments: 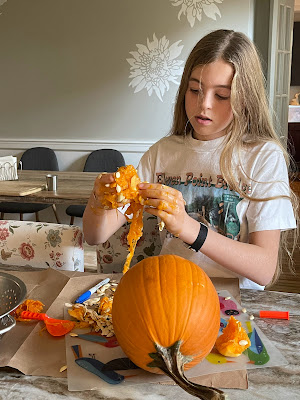 It's Christoween again, with the Thnxgvng lists growing and the pumpkins glowing and houseguests flowing and an end, hopefully, to mowing. Having closed up three houses, I am back to New York and the crosstown bus to see various professionals about the peripherals—eyes, ears, nose, toes. Sigh. But the city is beautiful in the fall. And now that I have decent internet I'll be back with the program. 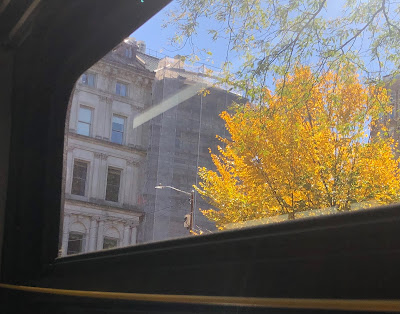 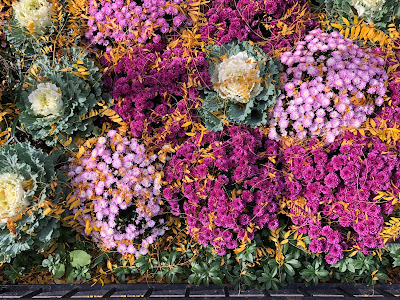 Posted by Claudia at 3:11 PM No comments: 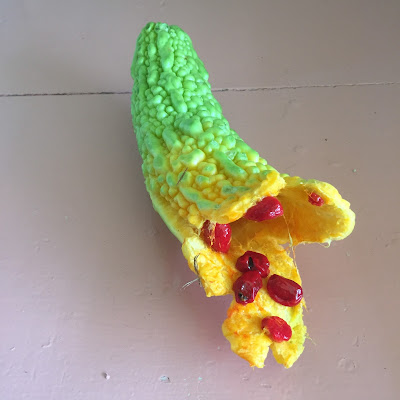